In the midst of COVID-19, governments desperate to break the recessionary cycle are focusing on infrastructure programmes, with an expected uptick in demand for commodities. This has led to renewed interest in commodity investments. At the same time, governments are more focused on decarbonisation and a move towards clean energy. If global decarbonisation goals are to be realised, significant new sources of metals will be needed to meet expected demand over the coming decades, which should benefit current producers and resource owners.

With a bias towards base metals, and no iron ore, Glencore’s commodity basket is unique compared to those of its peers. Sean Munsie and Raine Adams explain why they believe Glencore, despite its thermal coal assets, is well positioned in a decarbonising world.

Decarbonisation has become a major theme for governments and companies throughout the world. This has been supported by rapid declines in the cost of clean energy technologies and, increasingly, climate-conscious policies aiming for carbon-neutral economies by 2050.

Despite the impact of the COVID-19 pandemic, 2020 proved to be a standout year for climate commitments, and numerous governments are incorporating a green energy transition into their recovery strategies, as shown in Table 1. We can expect to hear more as the world prepares for the 2021 UN Climate Change Conference, COP26, in November this year. 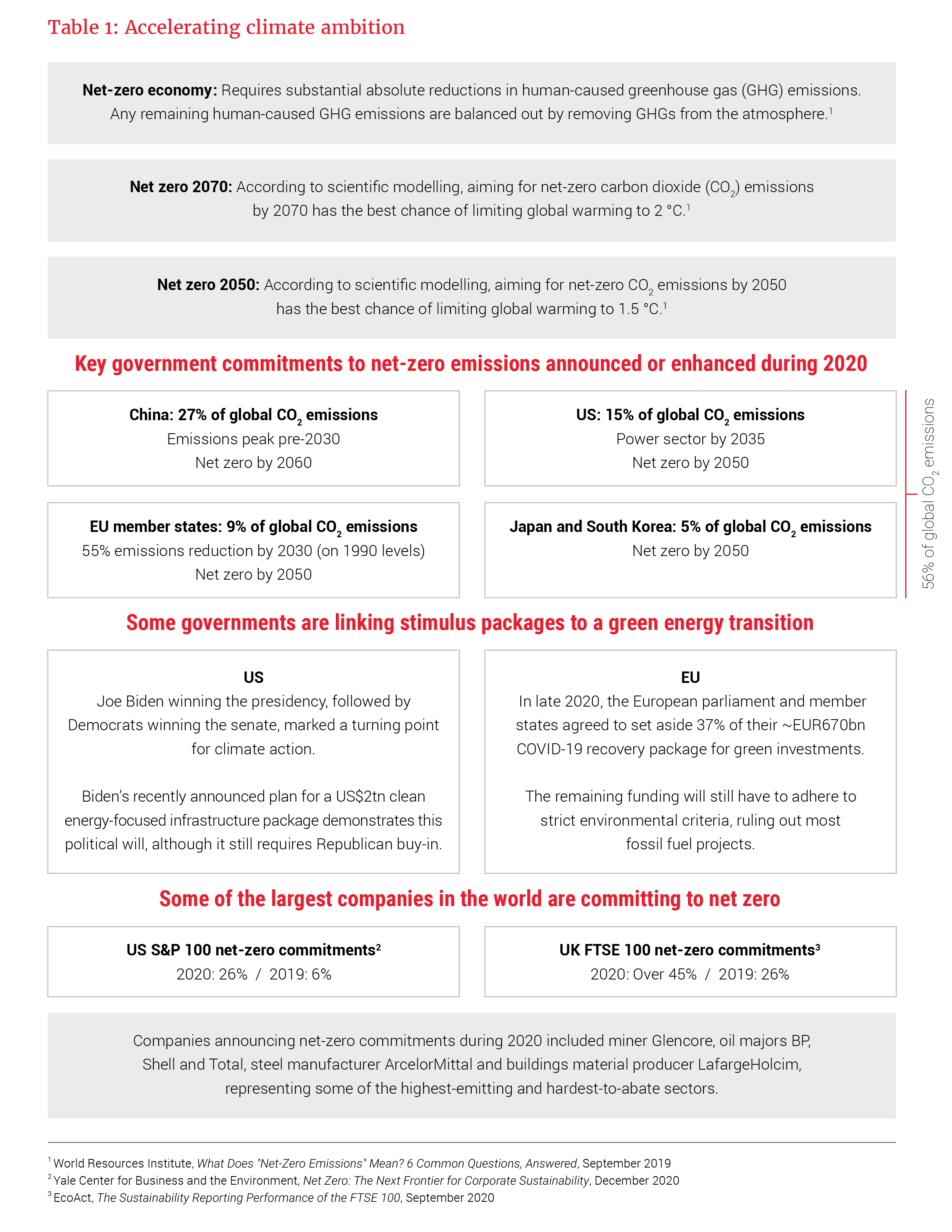 The commitments being made today require a complete rewiring of the global economy, which will be underpinned by electrification. It is also important that they continue to be weighed against what is happening on the ground. In the power sector, enormous amounts of renewable energy and battery storage will have to displace fossil fuel-based power, while in the transport sector, electric vehicle (EV) adoption is likely to accelerate as EVs move towards cost parity with internal combustion engine (ICE) vehicles, governments set ICE phase-out dates, and automakers set ambitious EV sales penetration targets. We will also see significant changes in the industrial and building sectors.

Low-carbon technologies are more mineral-intensive than their conventional energy counterparts. While the trajectory that the energy transition will take is still highly uncertain and may well fall short of a net-zero-emissions world by 2050, in all likely scenarios, global demand for metals will increase. Copper, cobalt, nickel, lithium, aluminium and zinc will be some of the winners, given their use in electrification and/or clean energy applications, as shown in Table 2.

Potential impact on our investment universe

The acceleration of decarbonisation initiatives will have differing impacts on commodity producers – some positive, as discussed earlier, and some negative. If these ambitious decarbonisation goals are to be realised, significant new sources of supply will be needed to meet expected demand, which should benefit current producers and resource owners.

However, if a bullish demand outlook is widely held for a resource that is relatively abundant and new projects are commissioned, this may well lead to depressed prices in time and disappointing returns. By the same token, producers of less-favoured commodities, where decarbonisation may pose a headwind for demand, could still provide a good investment opportunity if production costs are sustainably competitive, or valuations of the assets are low enough. We prefer a layered approach to commodities, investing based on company and industry fundamentals, which incorporates the impacts of decarbonisation, among other factors.

Graph 1 shows the revenue composition of the five largest diversified miners, the first three of which are available to investors on the local market. While we hold BHP and Anglo American on behalf of our clients, our principal exposure is to Glencore. With a bias towards base metals (copper, cobalt, zinc and nickel) and no iron ore, its commodity basket is unique compared to those of its peers and well positioned to benefit from the energy transition.

If these … decarbonisation goals are to be realised, significant new sources of supply will be needed to meet expected demand, which should benefit current producers and resource owners 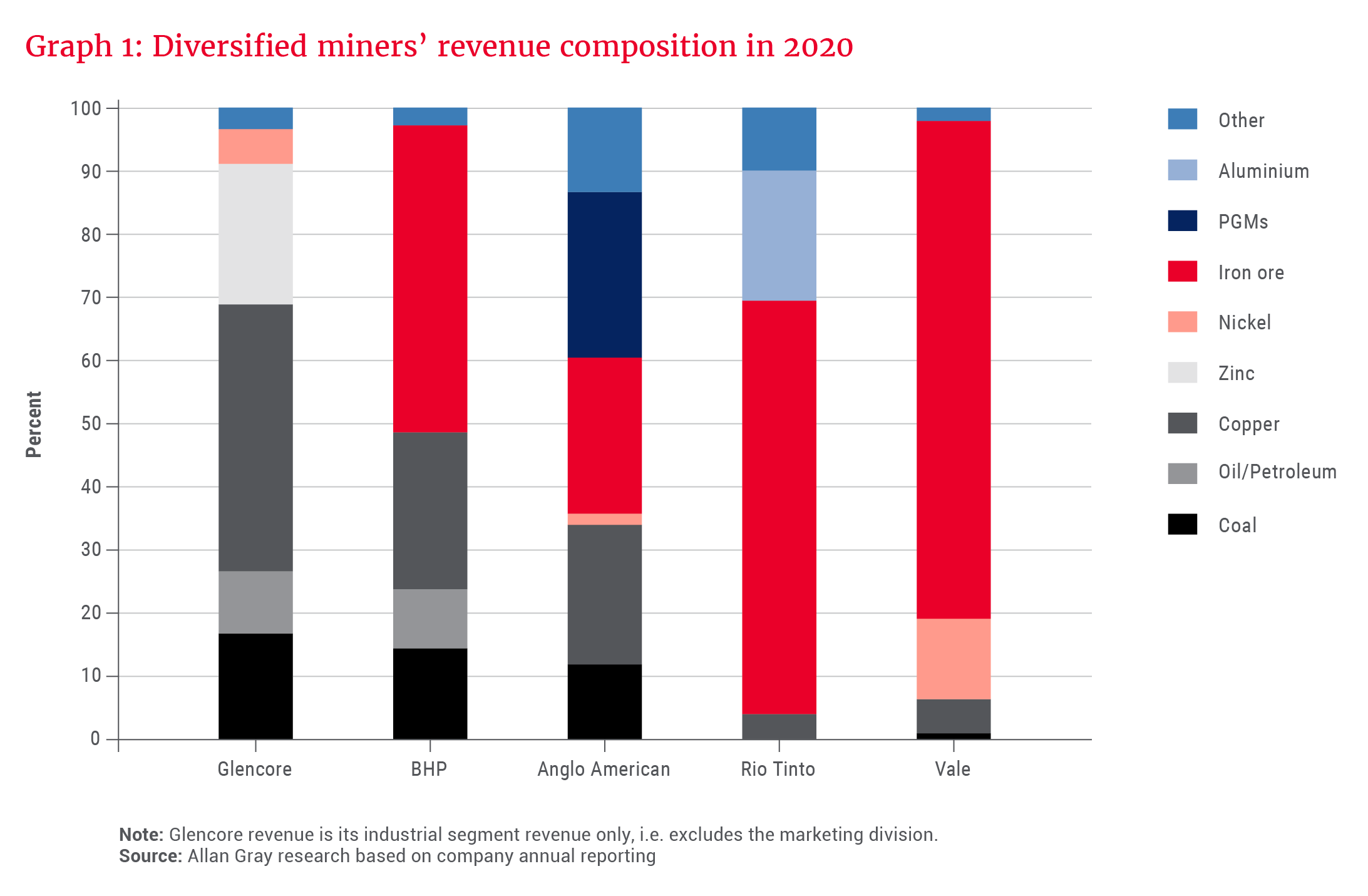 The investment case for Glencore

Table 3 provides demand forecasts to 2050 for the base metals relevant to Glencore’s commodity basket in a rapid energy transition scenario. Of course, all such models rely on numerous assumptions, which include the penetration of various clean energy technologies to 2050, their estimated useful lives, material intensity, commodity recycling rates, and the composition of sub-technologies per clean energy category. They should therefore be considered as indicative, rather than an exact science. Much can and will still change, and commodities used in only one or two clean energy technologies, such as cobalt, as opposed to in all, such as copper, remain more vulnerable to substitution risk.

It is an almost consensus view among miners that copper is one of the most promising commodities. This is based on a demand profile that follows global economic growth, boosted by decarbonisation initiatives. Despite this, the pipeline of mine projects likely to be commissioned is low by historical standards, owing to limited exploration and new resource discoveries since the end of the last super-cycle. Projects with lower grades, small in scale, or located in more difficult-to-operate locations often lacking infrastructure, all require a higher price (i.e. the incentive price) to be economically viable. To compound matters, existing mine supply is also declining at around 3% per annum as resources are exhausted. While thrifting, substitution, and technology advancements that lower production costs will help, new investment will be required in time to fill the supply deficit.

Glencore’s copper business is well positioned to maintain and, if necessary, grow production over the next few decades. The bulk of production comes from its South American mines, which are large, mostly long-life, and low-cost. And after several delays, its relatively newer mine in the Democratic Republic of the Congo, Katanga, is now on track to meet initial production targets. Glencore also benefits from the by-product cobalt at mainly its African mines, another commodity with a favourable demand outlook. Similarly, zinc and nickel demand is also geared to global growth, with nickel in particular a beneficiary of increasing EV penetration, given its key role in battery chemistry.

On the other side of the spectrum is thermal coal, to which Glencore is also exposed. Under the most ambitious climate commitments, thermal coal-burning would all but disappear by 2050. While the very long-term demand prospects are bleak, for an existing producer with well-located, low-cost mines, such as Glencore, the picture is more mixed. Industry demand is only expected to begin declining from the mid-2020s onward, with seaborne demand, particularly from Asian countries, still remaining robust for some time. Existing industry supply is likely to disappoint owing to chronic underinvestment, and the possibility of new mines opening is slim.

The combination of these factors could lead to periods of elevated prices as it will take time to transition away from coal. According to Glencore management, cash flows generated from coal will be directed to more future-facing commodities, with production coming down in line with demand as mines reach the end of their lives.

Iron ore, the main input in the steelmaking process, is the commodity most exposed to Chinese property construction and infrastructure build. After a two-decade period of phenomenal growth, Chinese steel production is now in a plateau phase, with peak production likely in the next few years. Thereafter, a gradual decline in usage is expected, similar to the experience in other industrialised nations.

As a major carbon emitter, the steel industry is not immune to the heightened focus on environmental issues in China, with the state targeting production cuts to reduce air pollution and encouraging greater use of cleaner scrap steel, which remains low compared to that in other countries. These factors help inform our bearish long-term view on iron ore, but we recognise that, in the shorter term, supply disruptions and stimulus measures contribute to high prices, as is currently the case.

Weighing up risks and opportunities

Whereas the market tends to project prevailing commodity prices into the future and then mark companies accordingly, we prefer to use our own estimates of mid-cycle, long-term sustainable prices in our valuations. During periods of elevated prices, which is the case at present in some areas, we may factor in a near-term boost to earnings in the valuation. While most diversified miners look appealing based on spot prices, in our view, Glencore is more attractive when more normal, longer-term pricing is taken into consideration.

Raine first joined Allan Gray in 2011 as a CA trainee and is currently an ESG analyst in the Investment team. She holds a Bachelor of Business Science (Honours) degree in Finance and a Postgraduate Diploma in Accounting, both from the University of Cape Town. Raine is a qualified Chartered Accountant.

Sean joined Allan Gray as an equity analyst in 2013 after working for various investment banks in the United Kingdom. He was appointed as a portfolio manager in 2020 and manages a portion of the stable portfolios. He is also the manager of the optimal portfolios. Sean holds a Bachelor of Commerce (Honours) degree in Accounting from Stellenbosch University. He is a qualified Chartered Accountant and has passed all three levels of the CFA® examinations.

What has gone wrong with Naspers?

For many years, Naspers was the star performer of the South African stock market. The onset of COVID-19 drove the Naspers and Tencent share prices to new...

Banking on green shoots at Nedbank

Siphesihle Zwane discusses the green shoots emerging at Nedbank and explains why they may reward investors who have enough conviction to stay the course.

One of the largest positions in the Orbis Global Equity Fund is Naspers, whose key underlying asset is a 29% stake in the Chinese internet juggernaut Tencent...

Naspers and Prosus have announced a transaction that changes the group’s financial structure. They hope this will reduce the large discount at which Naspers...