Two years ago, our crystal ball was cloudy. Shares and commodity prices suffered a rout in early 2016, and markets were concerned that economies around the world might fall into recession. That fear drove investors to pay up for certainty, driving bond yields to record lows.

Those fears proved unfounded, and from February 2016 through January 2018, investors in the FTSE World Index enjoyed gains of 48%. In recent months, however, markets have been choppier. So where are we now?

No time to be a hero

As we look at opportunities around the world, one thing is clear—it is no time to be a hero. In our view, markets appear plenty risky but insufficiently fearful. Fear and risk in the market tend to move in cycles, as shown in Graph 1. 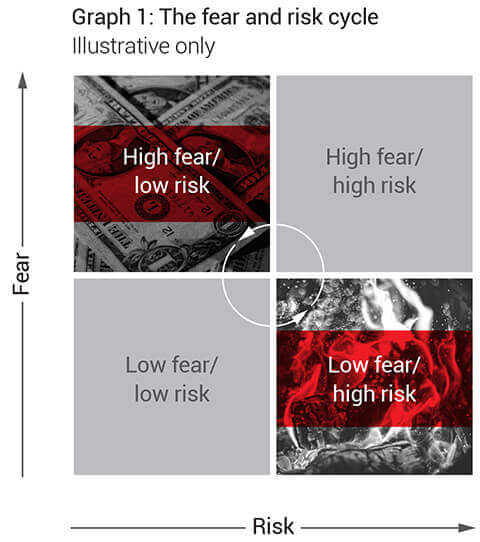 Things aren’t exciting when fear and risk are aligned. These environments tend to offer decent opportunities to active investors, but nothing extraordinary. The best opportunities arise when everyone is afraid but there’s nothing to be afraid of. These are great times to be a contrarian!

Early 2018 was not one of those times. As we looked around the world, we saw plenty of risks. Stock and bond markets remain expensive. Central banks are stepping back from their unprecedented money-printing experiment. The US government has pulled every available lever to keep asset prices high, and conflict continues to simmer in the Middle East. Risk appeared high, but investors appeared optimistic. High risk and low fear make a dangerous cocktail.

We have seen the results over the past few months. Following the enthusiasm of January, markets have fallen. Sentiment is not so rosy as it was, but in our view, fear levels are still too low. As one indicator, consider the “fear gauge” of implied volatility in the US stock market. Amid the unusual stability of 2017, the index was often below 10, which is unprecedented. When markets dived in February, it briefly spiked above 40. To us, that looked like a healthy shift! But since then, it has declined to 12, against a long-term average of 20. Investors remain sanguine.

There is a classic playbook for environments like this: shift out of cyclical shares like industrials and banks, and into defensives such as consumer staples. That usually works quite well. In the late stages of a bull market, enthusiasm about growth typically pushes up valuations for cyclicals, while defensives get left behind. This time, however, defensives aren’t cheap. With bond yields low around the world, investors searched for “bond-like” equities, and as the most bond-like equities available, defensives became popular. That popularity has started to wane as interest rates have risen, but there could be plenty more pain in store for these shares.

While many investors view consumer staples as extra-safe stocks, we think they are more like extra-risky bonds. Earnings and revenue growth for the likes of Nestle, Coca-Cola, or Procter and Gamble have been next to nothing over the past 10 years, and today, these shares offer dividend yields of a few percent. No growth and a few percent yield sounds a lot like a bond. But with one difference: if the stock market is down 10%, these shares might be down 5%.

Compared to defensive equities, we think short-term US Treasury bonds offer an attractive balance of risk and return. They offer 2.2% yields, with essentially no interest rate or stock-related risk. As some of our favourite cyclical shares have performed well, we have rotated some of the Orbis Global Balanced Fund’s capital out of those stocks and into short-term US Treasuries.

There is another way to manage against the risk of the cycle turning — invest in opportunities that have nothing to do with the economic cycle! Table 1 gives a small sample of these names: 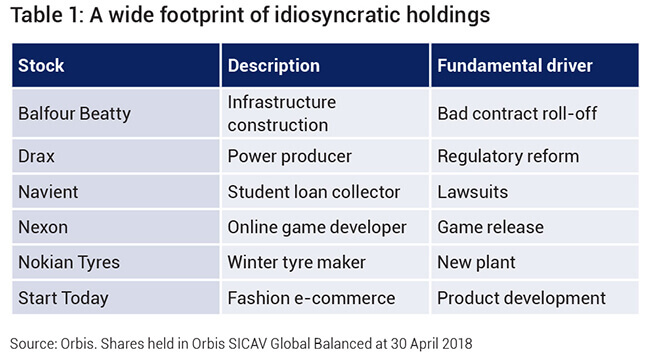 Drax is the UK’s only coal-fired power producer. The UK has tried to cut coal in favour of wind and solar, but the resulting stretched capacity has led to winter outages in some regions. The country needs reliable power, and Drax can provide it cheaply. It has transitioned some of its units from coal to wood pellets, a renewable source of energy, and is seeking to switch other units from coal to a highly efficient type of gas generator. Cash flow guaranteed through 2027 covers the company’s entire stock market value and net debt, and we think Drax will have a valuable role to play after that date. And importantly, the company’s success or failure has nothing to do with overall market valuations, or the economic cycle in the US. It is idiosyncratic.

The same is true of other shares such as Nexon, which is due to launch a mobile version of its blockbuster game, and Navient, which is being sued for collecting student loan payments on the US government’s behalf. Each of these companies has risks, but uncorrelated risks, and by combining them, we can manage risk while picking up attractively-valued shares.

In short, we are managing risk by doing what we always do: hunting for individual securities that trade at a discount to their intrinsic value. It’s not an easy environment, but by focusing on bottom-up opportunities, we believe we can provide an attractive balance of risk and return — without being a hero.

Alec joined Orbis in 2004. He is a member of the Bermuda-based Multi-Asset Investment team and is responsible for the Orbis Global Balanced Strategy. Alec holds a Bachelor of Science (Honours) degree in Naval Architecture from the United States Naval Academy and a Master of Business Administration from The Wharton School of the University of Pennsylvania. He is also a CFA® charterholder.

In his annual president's letter, William Gray, from our offshore partner, Orbis, reflects on a difficult year and reaffirms his conviction in the team's...

2020 has been quite a year and many of us are undoubtedly looking forward to putting it in the past. The pandemic, global lockdowns, US elections, one of the...

Orbis: Finding an edge in tech

The future of society and technology requires ever-increasing connectivity, data speeds, and computational power, and those improvements depend on ever more...

The continued outperformance of certain sectors, especially technology, has created an extremely high level of concentration within markets. This provides a... 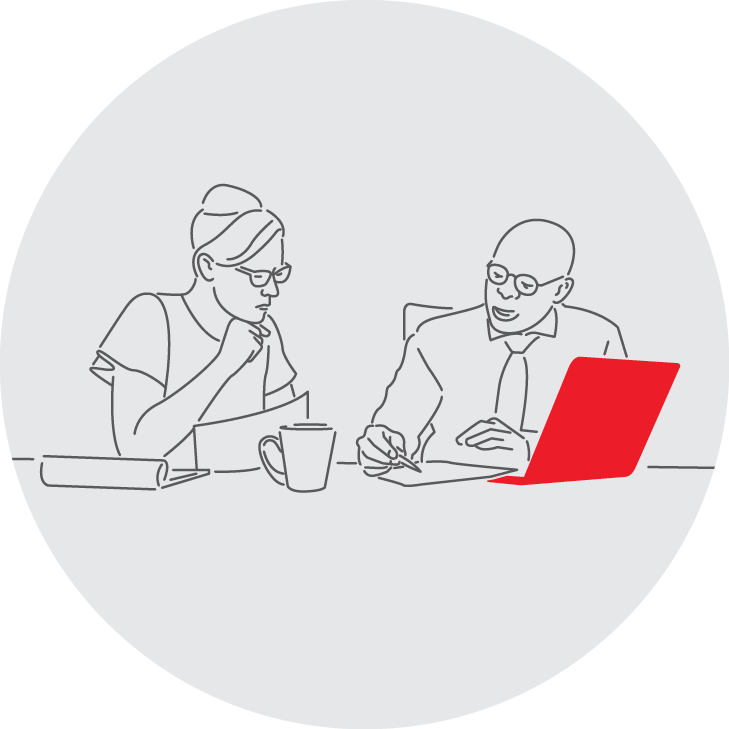