Investing: a history of bubbles

EXECUTIVE SUMMARY: 'Invest in stocks? Forget about it.' - USA Today headline, 8 May 2012. As contrarian investors, we cannot help but take notice when one of the most widely read newspapers in the US reports that Main Street has lost interest in the stock market. It brings to mind the infamous 1979 Business Week magazine cover that pronounced the 'Death of Equities' after a decade of dismal stock market returns. The consensus view at the time was that inflation hedges were the best place to be. Energy stocks glittered, as did gold and other commodity plays. Jonathan Brodie, from our offshore partner Orbis, examines how this advice panned out as he takes a look at various market gyrations over the last five decades.

Contrary to the forecasts, in the 1980s inflation hedges turned out to be the worst place to put your money. Bonds were the best and equities came back from the dead. But the real excitement was in Japan, which quickly became the next market darling. In the latter half of the decade, the Nikkei 225 Average nearly quadrupled in value and stood at an all-time high of nearly 39 000 by year-end 1989. By then books on Japanese management techniques topped the bestseller lists and became required reading at top business schools. But we all know what happened next. The Nikkei lost half its value by early 1992, and would halve again by 2003 (see Graph 1). 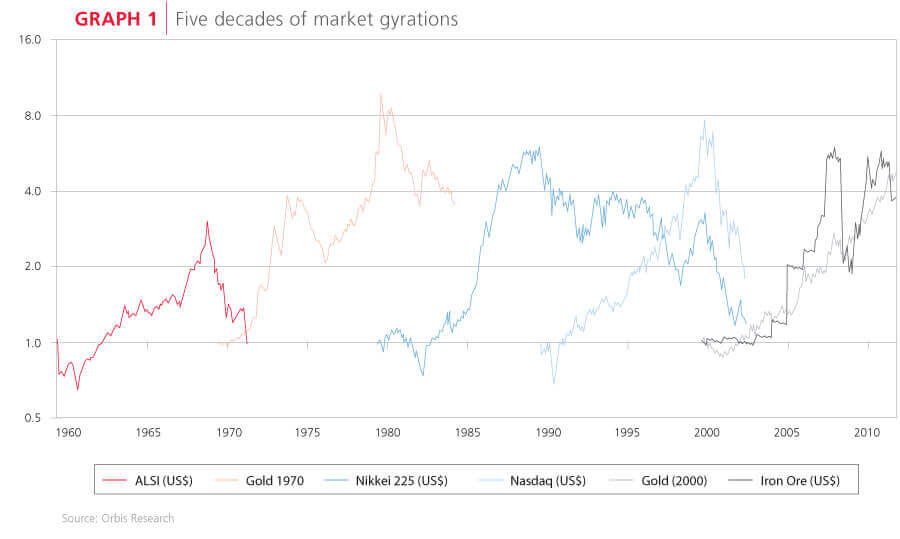 By 1999 - two decades after Business Week's story - opinion on US stocks had come full circle. Witnessing recent experience, and armed with the apparent certainty that the S&P 500 had never seen a 10-year loss, forecasters now argued that large-cap US stocks were essentially risk-free. The Japanese management books were long gone from coffee tables, replaced by new best-sellers such as Dow 36 000 and Jeremy Siegel's Stocks for the Long Run. The internet was christened 'the next big thing' and Cisco Systems became the most valuable company in the world, priced at over 100 times earnings.

As is well known, the tech bubble subsequently burst, taking the Nasdaq down 70% by 2003. Cisco's shares collapsed 85% from their peak. On the third anniversary of Dow 36 000 the Dow traded below 8 000, and the S&P 500 would go on to post its first 10-year loss by the end of the decade. In the aftermath of the technology, media and telecommunications (TMT) bubble, the US Federal Reserve moved aggressively to support asset prices. Together with financial engineering and a belief in sure-to-rise housing prices, this liquid courage fuelled a leveraged fiesta in US real estate. The resulting hangover was not pretty: the subprime crisis sent most of the world into recession and a stampede of capital into the 'safety' of global government bonds, which now generally offer negative real yields. The same investors who hated US Treasuries at 13% in the 1980s now happily buy them below a 2% yield. We could be wrong, but we doubt there will be a happy ending.

IF THERE IS ANYTHING WE CAN SAY CONCLUSIVELY ABOUT THE FIVE DECADES OF MARKET GYRATIONS, IT IS THAT DRAWING LONG-TERM CONCLUSION FROM SHORT-TERM EXPERIENCES CAN BE A DANGEROUS PROPOSITION

The South African market in the late 1960s provides yet another sobering example. By 1969 the FTSE/JSE All Share Index (ALSI) had risen by nearly 500% in the decade, prompting the Financial Mail to quote a leading broker who declared that 'the market is now in orbit, and the force of gravity no longer applies.' Two years later, the ALSI had lost two-thirds of its value.

It is easy to beat up on journalists and market pundits with the benefit of crystal clear hindsight. The history of investing will probably always be a history of bubbles inflating and then deflating badly. Very few succeed at forecasting the next wave of enthusiasm, and the vast majority of investors who try and fail suffer very significant long-term capital losses. Rather than trying to predict fashions, we focus on picking one stock at a time, with valuation as our guide. This is the essence of contrarian investing: we simply look for opportunities where the stock market allows us to invest at a substantial discount to our estimate of the company's intrinsic value. And we are prepared to wait patiently - and to look foolish, if necessary, while our thesis plays out.

In our experience, some of the best opportunities can be found in shares that are out of favour, neglected or poorly understood. For example, at the peak of the technology bubble in March 2000, the largest holding in Orbis Global was a mobile home manufacturer. Other top 10 holdings in Global made auto parts, golf clubs and jewellery. The Fund owned almost nothing in technology. As shown in Graph 2, the opposite is true today. At more than 30% of the Fund, Global's technology exposure is close to the highest it has been since the Fund's inception. What has changed? In a word: valuation. Today, the S&P Technology Sector Index trades at a discount to the market despite having superior return and balance sheet characteristics. That is not to say, however, that we are making any predictions about the future performance of technology shares as a whole; as was the case when we avoided technology in early 2000, the Fund's large concentration in the sector today is a function of the relative attractiveness of individual companies. We have found that focusing on valuation helps us to avoid areas of over-exuberance, although the clustering of ideas in the portfolio can sometimes have the illusion of a prediction. 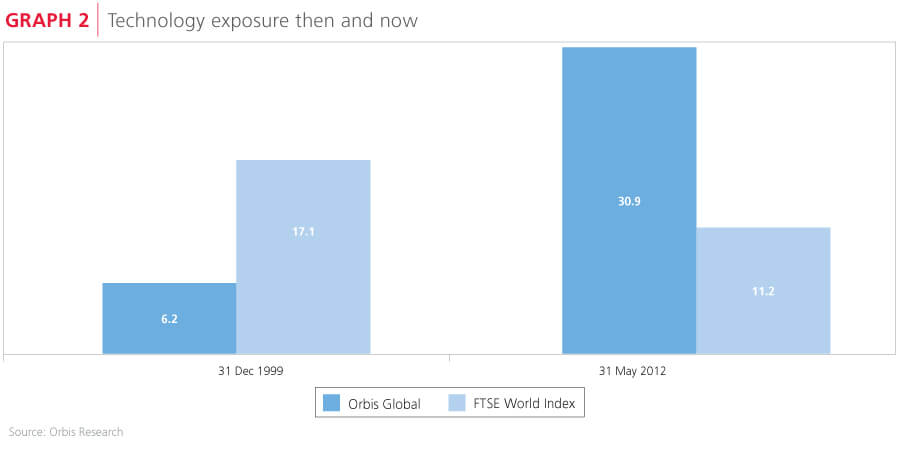 This can be illustrated by taking a closer look at some of the Fund's current technology holdings. In some cases, such as Google, we are attracted to compelling growth potential at undemanding valuations. In addition to smartphone growth, Google stands to benefit from long-term growth in internet advertising, which still remains in its infancy. The rapid growth in technology adoption in the developing world provides an additional tailwind.

Shares like Micron and Corning, on the other hand, are quite different. These firms operate in highly cyclical markets and the best time to buy is often when sentiment is extremely poor. Micron is currently grappling with a glut of memory chips and abysmal pricing. Yet we believe that it is one of the industry's strongest operators and is best poised to benefit from an inevitable turn in the industry cycle, although we cannot predict the timing. Likewise, Corning might be a classic case of short-term pessimism. The company's display glass business has suffered as television manufacturers face weak sales, but Corning commands half of an oligopolistic market for glass, which should help manage price declines rationally. Its other businesses - fibre optics, smartphone glass, and laboratory glass - all offer hearty growth potential. Other technology holdings (e.g. Cisco and Samsung Electronics) have multiple businesses and are exposed to both cyclical and secular forces. The common thread is a compelling valuation.

Only time will tell whether or not our analysis of the opportunities on offer in the tech sector is correct. Similarly, it will be many years before we find out if the recent USA Today headline will prove to be as great a contrarian market timing signal as the Business Week cover story was in 1979. If there is anything we can say conclusively about the past five decades of market gyrations, it is that drawing long-term conclusions from short-term experiences can be a dangerous proposition. But we do believe that the market has presented us with opportunities to buy shares of many high-quality companies for significantly less than we believe they are worth - a timeless approach that has served us well over many years and in many different market environments.

Jonathan joined Allan Gray Investment Counsel in South Africa in 1980. He left for the US in 1982 and rejoined Orbis in 2001. Effective 2012, he acts as a part-time consultant to Orbis’ team of Investment Counsellors. Jonathan is a non-executive director of Orbis Holdings SA Limited and heads the Buchanan Programme, Orbis’ employee philanthropic giving effort. He holds a Bachelor of Business Science and Bachelor of Arts (Honours) degree in Economics from the University of Cape Town, and a Master of Business Administration from Stanford University. He is also a CFA® charterholder.