The Orbis Global Equity Fund will mark its 25th year at the end of December. In that time, Orbis has provided access to the same fundamental, contrarian, long-term philosophy that Allan Gray has applied through its 40-year history. Of course, a proven investment philosophy does little good without a process to harness it and the right people to execute it. Seema Dala discusses how, by applying our shared investment philosophy through Orbis' research process, its investment team has delivered client returns 5.5% higher than the benchmark since the inception of the Orbis Global Equity Fund in 1990.

Great stock pickers are rare - and mortal. As such, Orbis cannot rely on one set of individuals to deliver superior performance now, as well as another quarter century from now. From the beginning, Orbis recognised that, if it was successful, future generations of stock pickers would be required to deploy an increasingly large pool of capital over time. It has long been clear that to deliver sustained long-term superior performance, Orbis would have to master not only stock picking itself, but also the ability to regenerate and grow its stock-picking capability - just as Allan Gray has done.

Over time, the Orbis investment team has evolved yet, importantly, while its stock-picking capabilities have expanded, it has retained the key principles that underlie its investment philosophy and process, including its culture of small, independent teams. In the late 1990s, Orbis had a single team of about seven analysts researching around 60 stocks for clients. It now has five company research teams, with an average of nine people in each, as well as a standalone portfolio construction team (see Figure 1).

These teams focus on regions or global sectors, and each researches about as many companies as the original team did in the past. Over time, a number of analysts have demonstrated superior ability in security selection and, as a result, have been asked to take on more responsibility. In addition to performing their own bottom-up research, these 'selected analysts' form independent views on ideas also researched by others. The recommendations of this smaller group serve as the main reference point for Orbis' Bermuda-based portfolio construction team.

With these research teams generating a larger number of high-quality ideas, the number of stocks in the Orbis Global Equity Fund has also increased. In 1990 Orbis Global Equity held 22 positions, with the smallest holding at 3% of the Fund's net assets. In June 2000, it held 73 stocks and 84% of its net assets in larger (>1%) positions. Today there are 125 positions in the Fund and holdings >1% represent 63% of the Fund. On average, each of the selected analysts recommends the same number of ideas that the Fund held at inception. So rather than diluting conviction by increasing the number of ideas per analyst, Orbis has a greater number of analysts each researching the same number of companies as before - and hopefully in even greater depth.

Orbis believes this approach will enhance its ability to capture a larger share of the top-performing stocks in its investment universe. The purchase universe for the Orbis Global Equity Fund is around 5 500 stocks, and in the past 12 months 1 700 of these have outperformed global stock markets by 10% or more. The Orbis Funds held about 50 of these shares - or a 'market share' of about 3%. With more analysts working in small, focused teams, Orbis believes they can uncover a larger number of great investment opportunities.

At the portfolio level, this approach offers several benefits. First, the analysts can seek opportunities in lesser-known securities that would be difficult to access if Orbis relied on smaller teams. Second, Orbis can pursue certain opportunities through a basket of related securities at smaller position sizes. This lets them act on a high-conviction thesis, while reducing idiosyncratic risk (the risk of a price change due to the unique circumstances of a particular security) and liquidity risk. And third, Orbis can gain exposure to high-return (but higher-risk) opportunities that might not be appropriate investments at larger position sizes.

A history of contrarian thinking

To deliver above-average investment returns, Orbis believes that one must be willing to take a different view from the market. Consequently, Orbis is comfortable for its portfolios to deviate from their benchmarks, sometimes substantially. So, has the increased number of stocks in the Orbis Global Equity Fund resulted in it more closely resembling its benchmark? One way to consider this question is to look at how different the geographic positioning of the Orbis Global Equity Fund has been relative to its benchmark at certain points in time, as shown in Graph 1. For example, the Fund had 40% more exposure to Japan than its benchmark, the FTSE World Index, in October 1998 (i.e. it was overweight Japan), yet it was underweight Japan by a similar magnitude when the Fund launched in 1990. In September 2003, the Fund was 33% underweight in North American shares. Most recently, at the end of June 2014, it had an 18% overweighting in Asia ex-Japan, a testament to Orbis' continued willingness to pursue attractive opportunities in areas scorned by other investors. 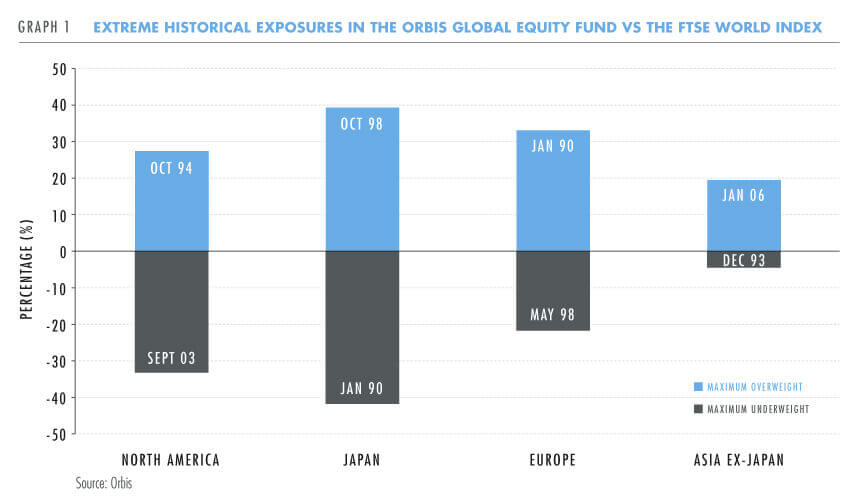 TO DELIVER ABOVE-AVERAGE INVESTMENT RETURNS, WE BELIEVE THAT ONE MUST BE WILLING TO TAKE A DIFFERENT VIEW FROM THE MARKET.

How different are the Orbis Funds from their benchmarks today?

While extreme exposures are a likely symptom of contrarian thinking, it is also helpful to see how much a portfolio as a whole deviates from its benchmark. To quantify how much the Orbis Funds differ from their benchmarks, one can use a measure called 'active share', devised in 2006 by Martijn Cremers and Antti Petajisto at the Yale School of Management. Active share compares the weights of individual holdings in the fund and benchmark. A portfolio with an active share of 0% holds the same holdings as the benchmark, in the same weights, and one with an active share of 100% has no overlap at all with the index. An active share of 80% is generally considered to be 'highly active'.

As Graph 2 shows, the active shares of Orbis' Strategies have fluctuated, but all have consistently remained in the 'highly active' category. Today, the Orbis Global Equity, Japan Equity, and Asia ex-Japan Equity Funds all have active share levels above 90%. Specifically, Orbis Global Equity has remained a highly active portfolio despite the increase in the number of stocks in the Fund. 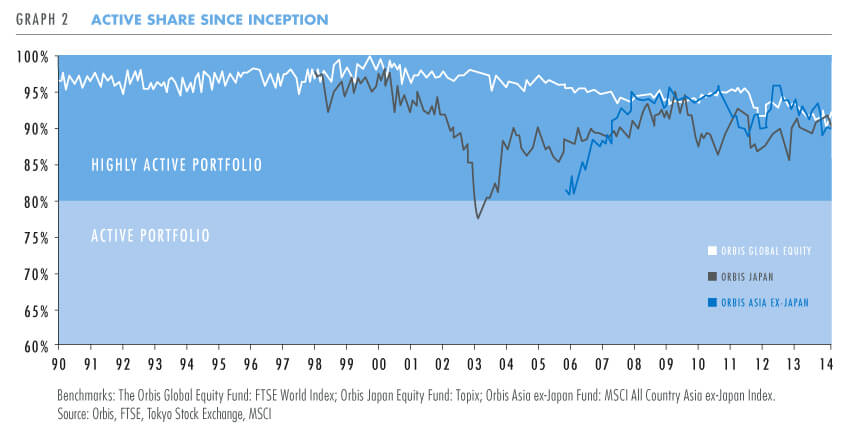 Sticking to its guns

One of the most pressing challenges facing organisations is to maintain their key principles as they grow. It is counterintuitive, but the aspects of the firm which gave way to its success can be the hardest to uphold. We believe that by retaining a small team structure, Orbis has empowered its individuals to always challenge consensus and make contrarian decisions, while ensuring the Orbis Funds retain the ability to be very different from their benchmarks and continue to deliver long-term outperformance to our clients.

Seema was employed at Allan Gray from 2007 to 2016. She joined Allan Gray as an investment analyst, before moving to Institutional Client Services and later becoming the joint head of this team. Seema holds a Bachelor of Business Science degree from the University of Cape Town, is a qualified Chartered Accountant (SA), and completed her management and leadership studies at Harvard Business School.