The US dollar has rallied significantly over the course of this year, leaving other currencies in its wake. Alec Cutler, from our offshore partner, Orbis, unpacks the reasons behind the currency’s strength and explains why the Orbis SICAV Global Balanced Fund has an underweight exposure to the dollar when compared to its benchmark.

Do not arouse the wrath of the Great and Powerful Dollar! We have, and it has been by far the biggest drag on relative returns so far this year.

The Orbis SICAV Global Balanced Fund (“the Fund”) entered 2022 with its dollar exposure greatly below that of its 60/40 benchmark on an accounting basis. We much prefer to look at currency exposures on a fundamental basis – one that considers the location of a company’s assets, sales and expenses, not just where its shares are listed. On a fundamental basis, the Fund was still substantially underweight the dollar coming into this year.

That has been painful. As shown in Graph 1, compared to the currencies of its major trading partners, the dollar has strengthened by 17% since the beginning of this year. For the first time in two decades, a dollar buys more than one euro. For the first time in 24 years, a dollar buys more than 140 Japanese yen. For the first time ever, a pound bought less than US$1.04. And the dollar’s strength extends beyond its traditional peers – it has also hit a record high against the offshore Chinese renminbi, and has even strengthened against the currencies of commodity-rich countries like Norway. 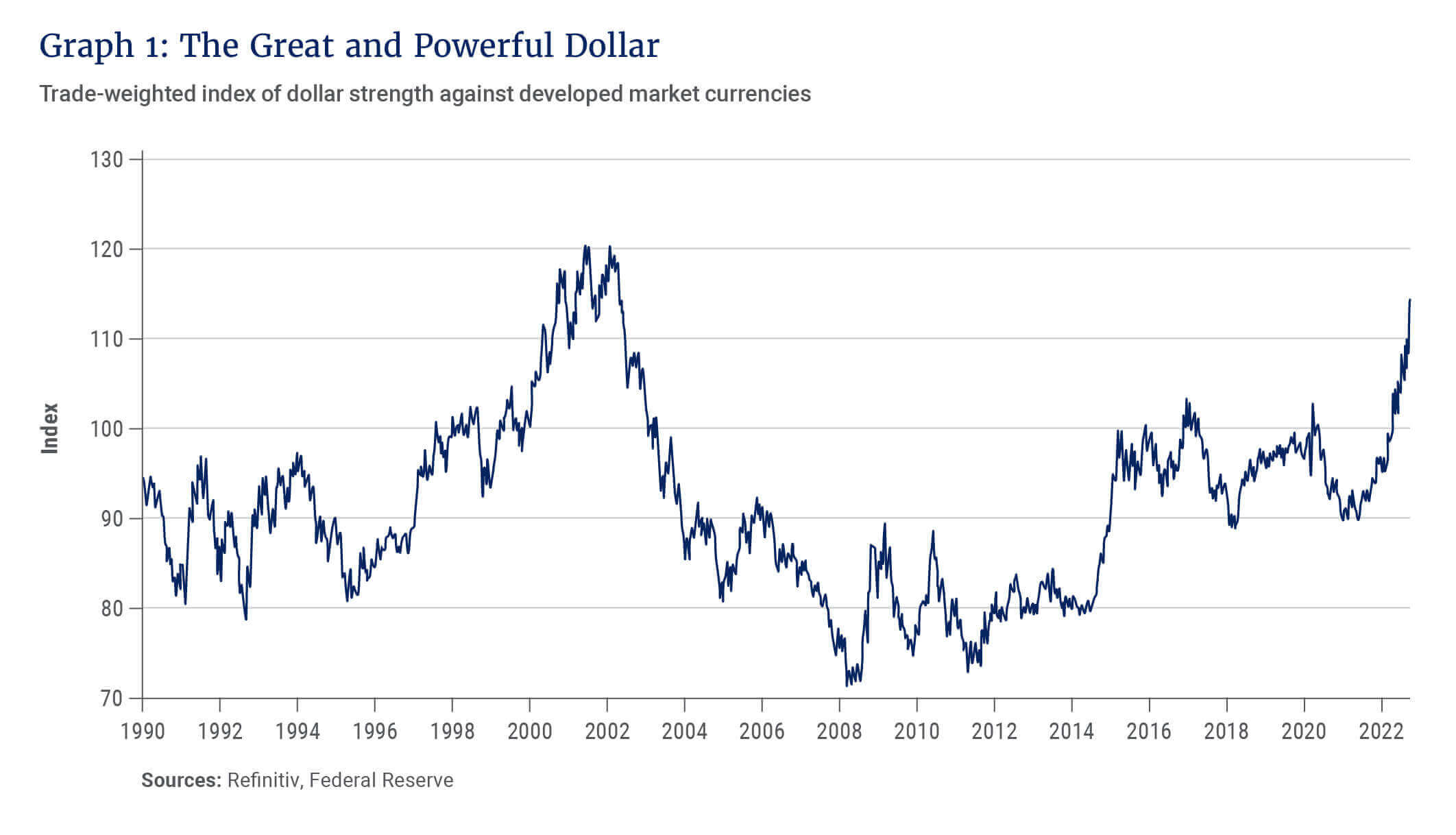 “Our currency, but your problem”

It is easy to see why the dollar has strengthened so significantly. Higher interest rates attract investors, who must first buy the currency to buy high-yielding assets priced in that currency. So far this year, the gap between interest rates in the US and elsewhere has risen dramatically as the Federal Reserve (the Fed) belatedly wakes up to the risk of persistent inflation.

Long-time clients will not be surprised to find that the richer the overvaluation gets, the fewer dollars we are likely to hold.

At the start of the year, US interest rates were at zero, and they are now above 3%. Other central banks have not hiked rates as quickly, so the so-called “rate differential” between the US and other countries has widened. That makes dollar assets more attractive to investors, boosting demand for dollars at the expense of other currencies. So while the Fed shuns the legacy of Richard Nixon’s Fed Chairman, Arthur Burns, they appear to be taking a line from his Treasury secretary, who told fellow finance ministers that the dollar is “our currency, but your problem”.

The dollar has other broad strengths. The US economy looks stronger than most others, and as the global reserve currency, the dollar benefits as a “safe haven” when investors are fearful about other assets.

Crucially, the US also produces plenty of its own oil and gas, at a time when Russia’s invasion of Ukraine has led to skyrocketing gas prices elsewhere. That hurts the so-called “current account” balance of commodity importers, who must spend more of their own currency buying commodities that are often priced in dollars and may even come from the US. Diverting money towards gas also drains money from other parts of their economies, increasing the risk of a recession. To cushion the blow to households and industry, governments in continental Europe, the UK and Japan have unveiled a raft of energy subsidies. These have the benefit of reducing reported inflation, but they are costly, leading to unusually large fiscal deficits. In the UK, the government’s energy support scheme may require additional borrowing worth up to 4% of gross domestic product. Widening deficits do not a strong currency make.

… when a currency is more than 20% overvalued, it suggests to us that it may be a poor store of purchasing power.

To the dollar’s strength, the other major currencies add their own weaknesses. The eurozone is most dependent on Russian gas, struggles to reach consensus on how to address energy shortages and faces political uncertainty from far-right governments, most recently in Italy. European bidders are pushing up the price of liquefied natural gas in Asia, which is also affecting Japan.

The Bank of Japan, unique among its peers, refuses to raise interest rates or abandon its cap on long-term bond yields. Instead, it has turned to direct currency intervention for the first time since 1998. As long as bond yields remain suppressed, that should be about as successful as ice skating uphill.

The Bank of England has also intervened (in the bond market), after the tax-cutting “mini budget” from Liz Truss’ government sent the pound to a record low and gilt yields to 15-year highs.

All that calls to mind a 2016 cover of The Economist of a greenish George Washington with the biceps of Arnold Schwarzenegger. But we’re also mindful of a different cover, from late 2020, showing a terrified Benjamin Franklin watching nervously as inflation caterpillars chew through his US$100 bill.

The US has an inflation problem. Though the market believes inflation has peaked in the US and is yet to peak in the UK, Europe and Japan, the breadth of inflation matters too. While the Biden administration was quick to celebrate month-on-month inflation readings of zero for July and August, measures of “underlying” inflation persisted at a 7-9% annualised rate. Inflation pressure is broader in the US, and more closely tied to sticky drivers like wage growth – good news for workers, but bad news for the currency. 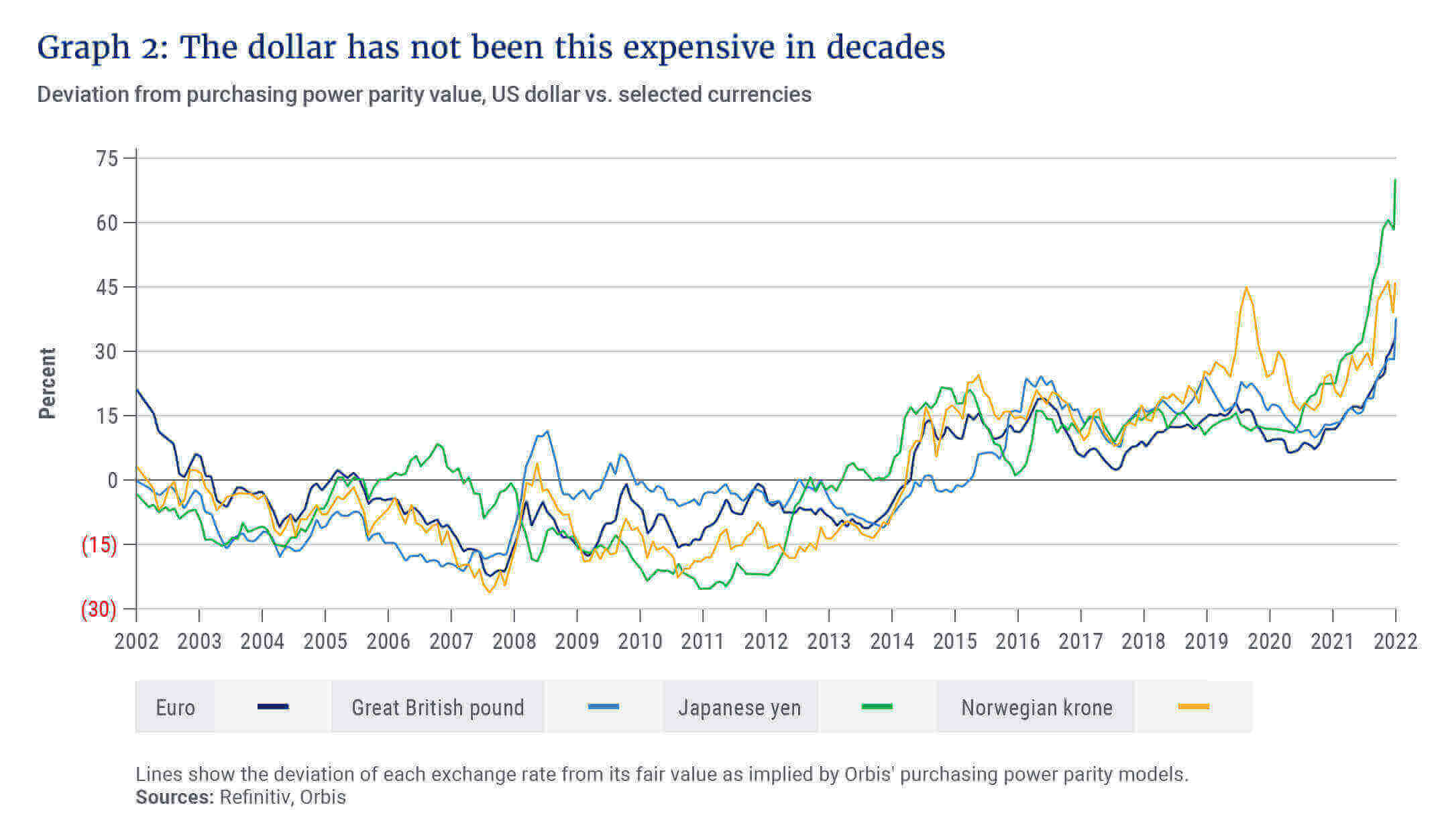 That quantitative metric is our starting point, not our ending point – it is important to analyse the buyers and sellers of a currency and how they could change over time. But when a currency is more than 20% overvalued, it suggests to us that it may be a poor store of purchasing power. This is largely why we actively manage our currency exposures.

What could shake the dollar’s strength?

It is hard to imagine now, with everything going right for the dollar, that anything could shake its strength. But things could change. They always do. Resolution of the Ukraine conflict could ease energy pressures in Europe. Japan has just reopened its doors to tourism, and it hosted 31 million yen-purchasing tourists in 2019. Central banks elsewhere could catch up with the Fed’s interest rate hikes.

As contrarians, we like to point out that the path from “completely terrible” to “merely bad” can be an extremely rewarding one. The same is true in the other direction: The path from “completely perfect” to “merely excellent” can be an extremely painful one. With currency valuations where they are, we think that is a great risk for the dollar, and a risk worth mitigating for our clients. Long-time clients will not be surprised to find that the richer the overvaluation gets, the fewer dollars we are likely to hold.

Alec joined Orbis in 2004. He is a member of the Bermuda-based Multi-Asset Investment team and is responsible for the Orbis Global Balanced Strategy. Alec holds a Bachelor of Science (Honours) degree in Naval Architecture from the United States Naval Academy and a Master of Business Administration from The Wharton School of the University of Pennsylvania. He is also a CFA® charterholder.

Nicola Dormehl, from our offshore partner, Orbis, discusses the energy transition and energy holdings that are likely to play an important and rewarding role...

In investing, risk and opportunity are two sides of the same coin. Graeme Forster from our offshore partner, Orbis, unpacks current distortions in the market...

"Don&rsquo;t put all your eggs in one basket" is a phrase familiar to many of us, and when it comes to investing and minimising risk, it is quite a sensible...