Orbis: Tech can be contrarian - if the price is right

We are contrarian investors, and technology shares are often popular. Given that, you might expect us to shun them. At times, we have: when tech stocks traded at dizzying valuations in 2000, we avoided them in favour of inexpensive “old economy” businesses with solid fundamentals. But apart from the bubble, we have typically been overweight technology shares, as show in Graph 1. These stocks rarely trade at low price multiples, so how is this consistent with our value-oriented approach? 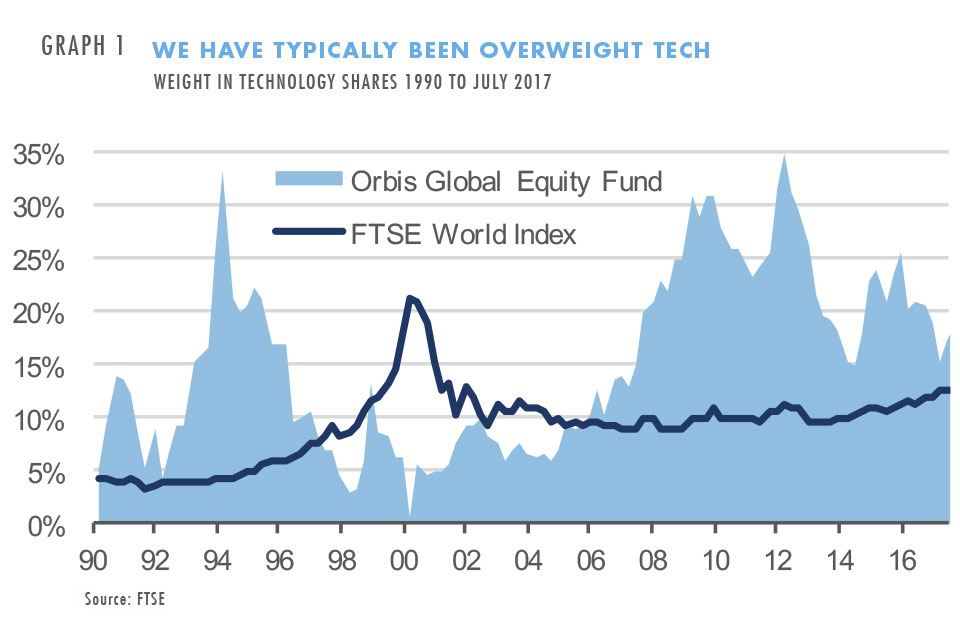 We do not look at price multiples in isolation—our focus is always on the relationship between a company’s valuation and its fundamentals. With that perspective, we have usually found a number of undervalued shares among technology names. These opportunities generally fall into two groups: 1) cyclical stocks at the bottom of a cycle, and 2) reasonably-priced beneficiaries of secular trends.

Cyclical technology stocks behave much like cyclical stocks in other sectors

A good example is Micron Technology in the 2011-2014 period. Micron makes memory chips, which has always been a cyclical business. Factories are expensive, so once a plant is built, producers tend to churn out as many chips as possible—no matter the prevailing memory price. When producers build too many factories, profits collapse.

We bought Micron in late 2011 during a period of oversupply and depressed profitability. Over the following few years, memory producers grew more restrained about adding capacity, and the cycle turned. Profits increased, leading to good returns for shareholders.

When profits are depressed, poor sentiment may lead to underperformance and low valuations—a classic contrarian setup. It may be less obvious to see how a secular growth stock can trade at a discount to intrinsic value.

Recently, we have found a number of long-term growth opportunities in technology-related companies. In July, Ben Preston discussed one example—Amazon.com. Our thinking is similar on other e-commerce shares, including JD.com in China and MercadoLibre in Brazil. In the US, we have also found attractively-priced software companies such as Alphabet (Google) and Facebook. Each of these businesses is cash generative, and each can deploy its cash into highly attractive organic investments and acquisitions. This ability to reinvest is essential, as it allows the companies to sustain their above-average growth. To understand the attractiveness of these shares, it may be helpful to consider our experience with NetEase.

NetEase makes games where millions of users play together online. The games are highly profitable, and NetEase can reinvest its cash to develop new games and adjacent internet businesses. The company is also a major beneficiary of rising internet penetration in China. The combination of this long-term trend and the company’s development skill have helped it deliver earnings growth of 30% p.a. over the past 13 years. That growth has driven terrific long-term outperformance versus world stockmarkets.

We first looked at NetEase during the global financial crisis, and the Orbis Funds were major buyers of the stock in 2010. By that time, it had grown plenty already. Over the previous six years, the company’s earnings more than quadrupled, and its stock outperformed world markets by a cumulative 200%, helped by a rise in Chinese internet penetration from below 10% to about 30%.

Throughout 2010, NetEase was available for 20 times earnings or less. With the benefit of hindsight, the stock was clearly a bargain at any point during that year. NetEase has performed so well since then that an investor could have paid over 50 times earnings in 2010 and still matched the market return over the following six years. The company’s growth potential was underappreciated by the market, and as a result, its share price represented a substantial discount to its intrinsic value.

We don’t always get things right

In both cyclical and growth opportunities, sometimes we are just plain wrong. That was the case with our investment in Blackberry in 2009-2011. While we saw the iPhone as a competitive threat, we believed the combination of rising smartphone adoption and Blackberry’s edge in secure communications would preserve its growth potential. We underestimated the threat, overestimated Blackberry’s strengths, and sold when it was clear our thesis was broken. Far from delivering superior growth, Blackberry’s earnings peaked in 2011.

While growth opportunities can be rewarding if they are undervalued, they can be risky if the market overestimates the value of a company’s growth potential. Consider Cisco. At its peak in 2000, the company traded for over 150 times earnings due to enthusiasm about its growth prospects. Since then, it has grown earnings faster than the wider market—but not by nearly enough to justify that sky-high valuation. Anyone who bought at the peak learned a painful lesson in the risks of seeking growth at any price. Valuation always matters. Even in tech.

Rob joined Orbis in 2011 following the completion of his degrees. He is a member of the team of Investment Counsellors, which is responsible for servicing Orbis’ institutional clients and investment consultants. His responsibilities include investment communications, with a focus on the Orbis Global Balanced and Japan Equity Strategies. Rob holds a Bachelor of Arts (Honours) degree in Professional Writing and Philosophy and a Master of Arts in Professional Writing, both from Carnegie Mellon University. He is also a CFA® charterholder.