The past quarter has been painful. After an encouraging start to the year, the performance of our offshore partner, Orbis, has been impeded by its exposure to selected Chinese technology shares and the broad underperformance of value-oriented shares globally. John Christy, from Orbis, discusses the reasons behind the underperformance and explains why Orbis is optimistic about its current holdings.

While we try not to dwell on quarterly results, the past few years have also been disappointing. As co-investors in the Orbis funds, we share the frustration that some of you may be feeling.

As painful as they may be, times like these are an inevitable consequence of our bottom-up approach. Labels such as “value” and “growth” are often used to bucket groups of stocks together according to shared quantitative characteristics or “factors”. But we focus on the risk/reward proposition of each individual investment opportunity, with risk defined as that of permanent capital loss rather than of looking foolish in the short or medium term. For better or worse, clients should expect this approach to produce an idiosyncratic pattern of relative returns that is uniquely our own. Over the long term, it is an approach that has served our clients well, but also one that can be uncomfortable for fairly long periods of time.

The past few years have been a reminder of what those difficult periods can look like up close. As shown in Graph 1, it helps to break it down into three distinct stages. 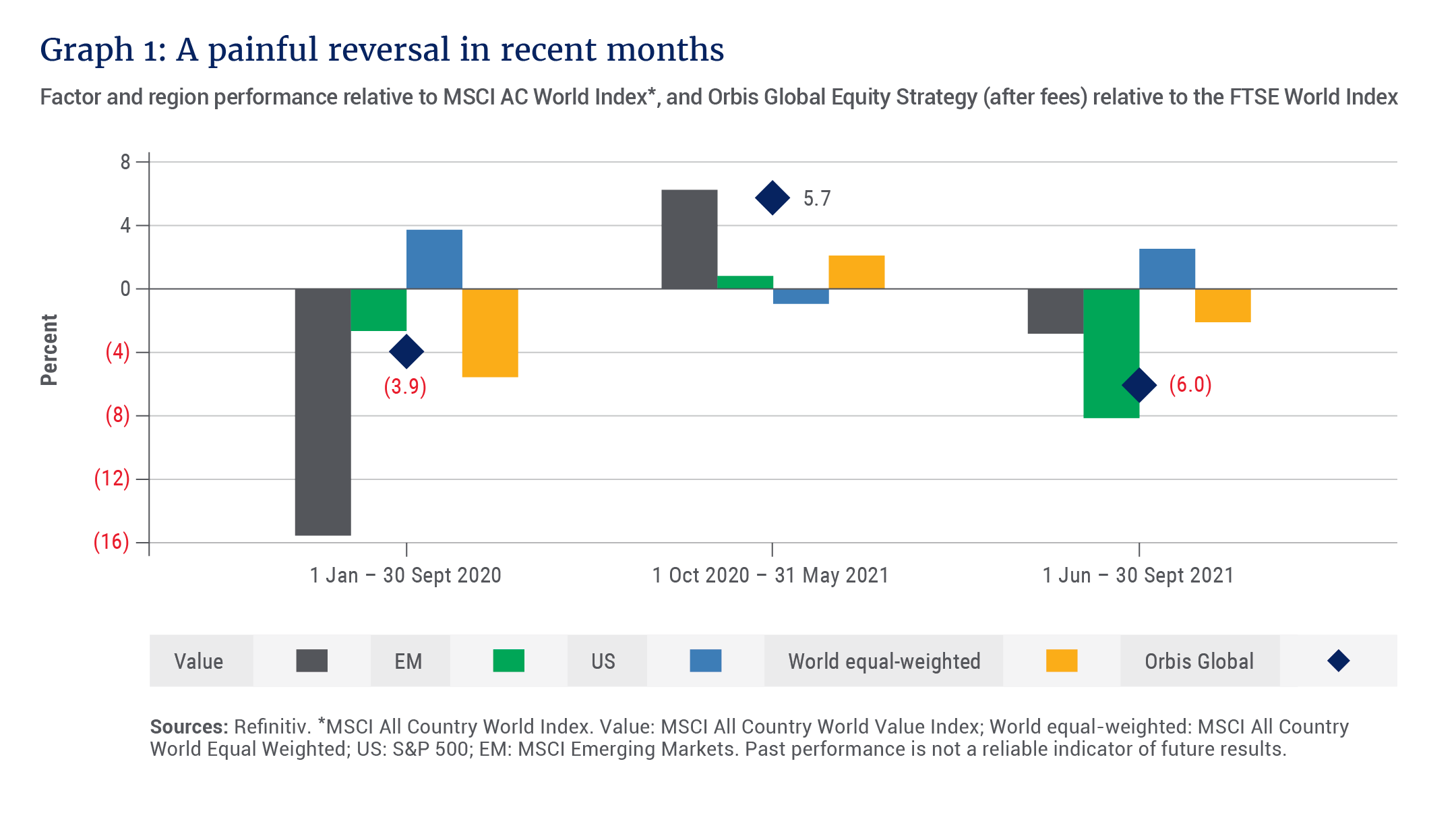 Heading into 2020, the market was characterised by massive dislocations between the valuations of shares belonging to the value and growth factor buckets. But there’s a big difference between picking a few attractive stocks that happen to fall into a particular bucket and buying the entire bucket itself. We do the former, not the latter. For example, we owned shares such as BMW, Honda, and several Japanese trading companies – all of which were trading at or below their book value. Since book value is often used as a metric in factor definitions, our bottom-up stock selections resulted in a portfolio biased towards the value factor.

Over the long term, it is an approach that has served our clients well, but also one that can be uncomfortable for fairly long periods of time

But we believed that our selections from the value bucket were significantly more attractive and resilient than the rest of their peers. As the pandemic unfolded, the broader value bucket was hit particularly hard as investors sought shelter in higher-quality and often more expensive areas of the market. We felt our share of the pain as well, but during the first nine months of 2020, the Orbis Global Equity Fund (“the Fund”) held up much better than the value factor – and many other value investors – thanks to our holdings elsewhere in the portfolio, notably in the US and China.

As a group, value shares came roaring back from last October through May of this year – driven largely by vaccine news and the prospect of the world returning to “normal” sooner than expected. Many of our stock selections benefited from that tailwind, but actually did a bit better than exposure to any particular factor would suggest. In recent months, it has cut the other way, driven in part by a few stocks in China.

Leaving political risk aside, the Chinese equities that we own in the portfolio look extremely compelling and are trading well below our assessment of their intrinsic value. But we don’t have the luxury of investing in a vacuum. Indeed, escalating geopolitical and regulatory risks were our primary motivation for reducing the Fund’s aggregate exposure to China in the second half of last year – trimming it from 20% at 30 June 2020 to 15% at 31 December 2020. With the benefit of hindsight, we should have trimmed more.

As tempting as it may be to take a more aggressive stance in China at today’s valuations, we are increasingly mindful of the risks. At 9% of the portfolio at 30 September 2021, which includes Naspers (that derives nearly all of its value from its stake in Tencent), we believe our position sizing in China is appropriate in light of the risks.

We remain enthusiastic about selected businesses in the area. The largest of these positions is NetEase, which is the second largest holding in the Fund and best contributor to its long-term relative performance. NetEase has a leading online game franchise in China, a highly impressive founder CEO who is well aligned with shareholders, underappreciated upside coming from other businesses such as music and education, and opportunities to expand globally. NetEase has been a fantastic business, compounding earnings per share at a rate greater than 25% per annum since 2003. A US$10 000 investment in NetEase back then would be worth more than US$500 000 today.

None of this has mattered in recent months. NetEase shares are nearly 40% below their peak in February amid increasingly intense regulatory scrutiny in China – in particular, strict measures to limit the amount of time that kids can spend playing video games to just three hours per week in designated time slots. Our view has been that NetEase will be able to cope with the new regulations given that its customers are predominantly adults, and that it has successfully navigated regulatory headwinds in the past.

At current prices, we believe NetEase’s valuation remains attractive at 17 times core gaming earnings, and we are comfortable with the position size. That said, we cannot rule out more stringent measures in the future.

As painful as these developments have been, it is worth remembering that leaning into political risk has also worked in our favour. As we discussed in September 2020, on the eve of the US presidential election our holdings in managed care organisations (MCOs) such as UnitedHealth Group and Anthem are uniquely sensitive to political risk.

We first bought into the MCOs in 2008 amid fears about “Obamacare”, and were presented with another opportunity when Bernie Sanders proposed “Medicare for All” in the 2020 presidential campaign. The doomsday scenario is always the same – that the MCOs will be put out of business by a nationalised healthcare model – but the pandemic also brought fresh fears of a surge in COVID-19-related claims.

As a result of these fears, these businesses have rarely traded at demanding valuations. Despite attractive fundamentals, UnitedHealth has on average traded at a 6% discount to the S&P 500, and Anthem has traded at a 22% discount – and both have been even more attractive when uncertainty is most extreme. We took advantage of the extreme pessimism to build a larger position. At 30 September, our positions in UnitedHealth and Anthem accounted for 5% of the portfolio.

Since President Biden took office, he has not made any notable moves in healthcare and appears to be devoting political capital to infrastructure and climate issues instead. History has also shown that the most important reforms tend to be tackled in the first year of a new presidency, when momentum is strongest. There are some initiatives being discussed that would affect prescription drug pricing, but none of these are transformational for the system, nor do they appear materially negative for the MCOs.

Importantly, UnitedHealth and Anthem have nothing to fear from Chinese regulators, just as NetEase will never need to care about US healthcare policy. From a fundamental perspective, these businesses are completely uncorrelated. When we assemble a whole portfolio of opportunities like this, we end up with a collection that is truly differentiated. Historically, our analysis shows that less than half of the Fund’s long-term relative performance can be attributable to its factor exposures. In both good times and bad, our results have been overwhelmingly driven by our bottom-up stock selections.

As a thought exercise, imagine going back in time to the early days of Orbis and setting up shop across the street from us. But instead of hiring a bunch of analysts to pore over financial statements and meet with management teams, you developed an investment approach based solely on mimicking the factor exposures of the Fund. These days, it would be even easier to do with a selection of widely available and low-cost exchange-traded funds. Interestingly, you could have beaten the World Index – an impressive feat – but you would have been unable to replicate the performance of the Orbis Global Equity Fund over its history (see Graph 2). 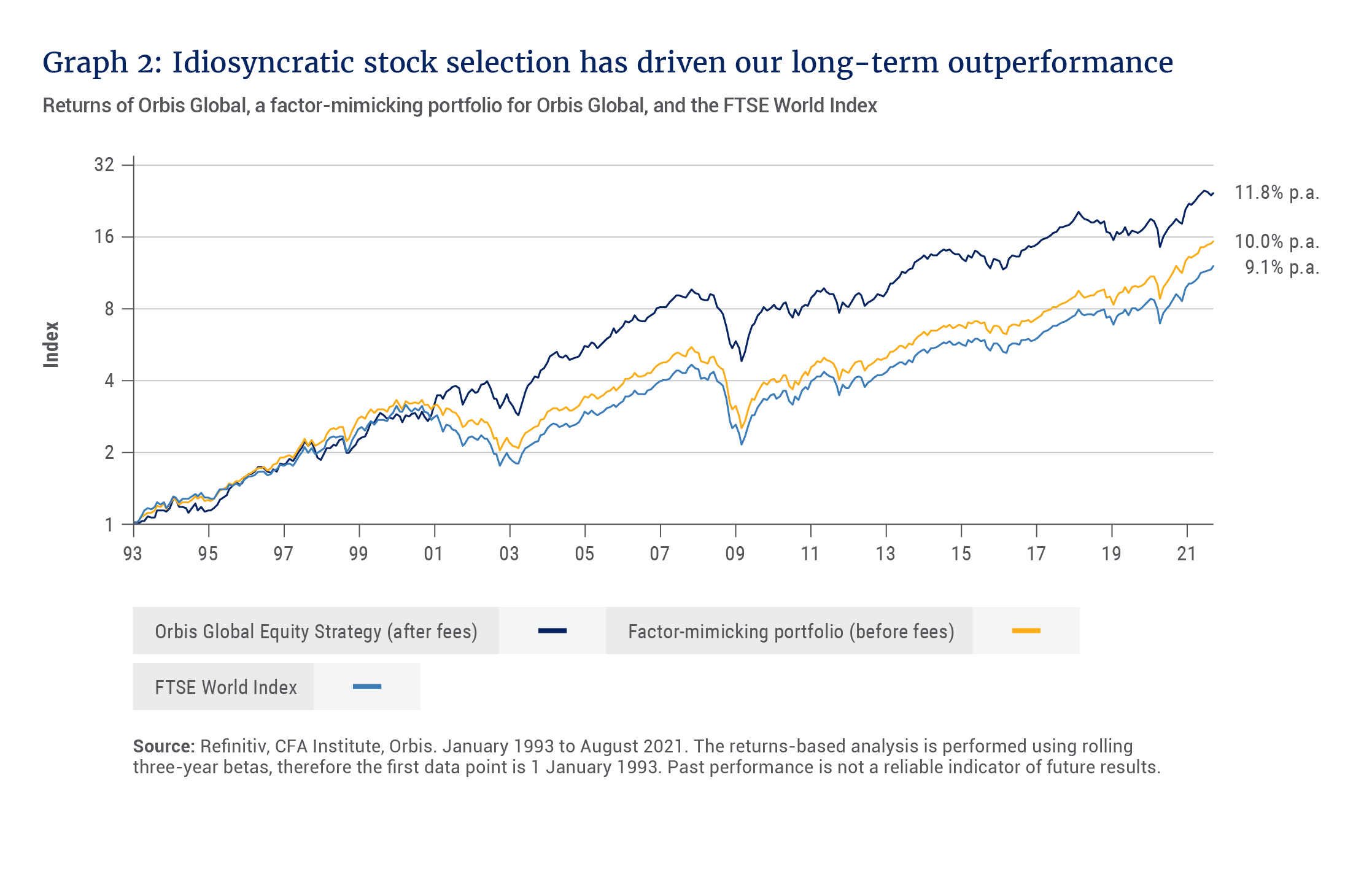 Only time will tell if our current selections can repeat this performance in the future. We are optimistic. If we aspire to deliver higher returns than global stock markets without greater risk, a good starting point is to buy better-than-average companies at lower-than-average prices. That’s exactly what we are able to do today.

When compared to the averages of their World Index peers, the companies held in the Fund are growing faster and yet trade at significantly lower valuations. To us, that’s pretty exciting – especially at a time when one can easily pay more than 50 times revenue for an unproven software business, or US$1 million for a digital picture of a rock.

John joined Orbis in 2010 and is a member of the team of Investment Counsellors, which is responsible for servicing Orbis’ institutional clients and investment consultants. His responsibilities include oversight of the firm’s strategic and investment communications. John holds a Bachelor of Arts degree in Economics from Fordham University and a Master of Business Administration from Carnegie Mellon University. He is also a CFA® charterholder.