Jacques Plaut and Duncan Artus discuss the positioning of our equity and multi-asset funds given the pre-existing trends exacerbated by the war in Ukraine. These trends, which we have been discussing for some time, include higher realised inflation, higher global interest rates and an increasingly divided world geopolitically. The offshore portion of our asset allocation funds has been well positioned for these changes.

The surprise to many clients and investors was how well local assets performed in the first quarter of the year. It is not often that the rand strengthens during a global crisis. We examine the reasons for this strength, what it has meant in terms of the makeup of our portfolios, and how sustainable it is. Lastly, in the context of the global sell-off in technology shares and its large weighting in most local portfolios, we take a closer look at Naspers post its 50% decline. Watch a 25-minute recording of Jacques Plaut’s presentation at a recent Allan Gray investment update and see a summary of the key takeouts below.

The direct impact of higher global inflation on the everyday life of people is not only higher prices for basic foodstuffs but actual shortages. A tangible example of this is the rationing of sunflower oil in South Africa – as reflected on the Woolworths website. We are currently focusing on finding consumer companies that can pass on a reasonable portion of the price increases.

While we are used to high single-digit rates of inflation in South Africa, this has come as quite a shock to most developed world consumers. Indeed, at over 8%, inflation in the USA is higher than ours at 5.9%. South Africa’s inflation remains well controlled, for now, relative to our emerging market peers. Despite the relative levels of inflation, the US 10-year bond yields only 2.8% compared to 10.1% on a similar duration bond locally. We remain bearish on developed world long-term sovereign bonds.

Commodities give SA a boost

One of the key contributors to South African asset performance has been our position as a commodity exporter. We shudder to think what may have happened to our economy had COVID-19 occurred in a commodity bear market. Higher commodity prices have been driven by the war in Ukraine, inflation, an underinvested supply base meeting rising global demand and an onshoring of supply chains. These higher prices, particularly for platinum group metals (PGMs), and demand for our exports, have led to an improvement in our current account. We have a current account surplus and the large increase in tax revenues from the commodity windfall has helped to somewhat rein in our fiscal deficit, as shown in Graph 1. Despite this good news, South Africa is net short oil and petroleum, which are growing as a percentage of our imports. Many emerging market countries are facing extreme pressure on their currencies and economies as energy prices increase faster than the price of their exports. 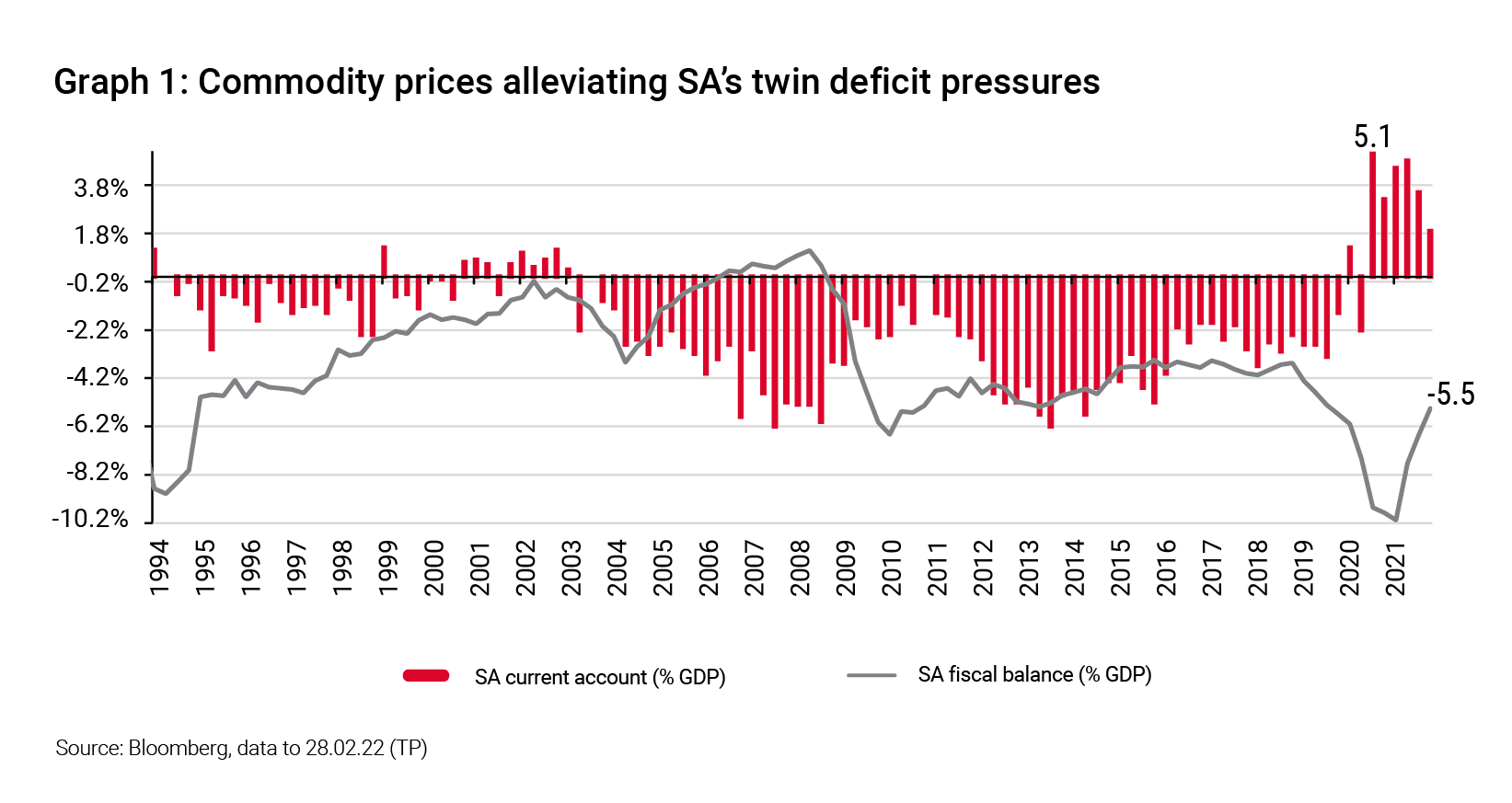 Putting this all together, it is easier to understand why our currency, bonds and equities have held up better than would normally be expected in a global crisis. This has been reinforced by who we are not rather than who we are through the lens of a global emerging market investor. After having been burnt through their Russian holdings and having experienced the significant sell-off in Chinese technology companies (see below), many investors have been looking for safe havens. South Africa is not Russia, Turkey or Central Eastern Europe; nor are we China, Taiwan or the Koreas.

If we are in the early stages of a long commodity bull market, South Africa will continue to broadly benefit from these tailwinds, but it is debatable how long they can paper over the fundamental structural problems we have in our economy and the seeming inability to address them by our government.

One of the most significant changes to markets this year has been the material sell-off in global technology and so-called “disruptor” stocks (see Graph 2). The decline in the share prices of companies in the latter group has been particularly brutal and broad-based. Stocks such as Zoom, exercise media and tech company Peloton, and cloud computing company Snowflake have lost most of their market value as the market once again focuses more on valuation and cash flow rather than stories – no matter how exciting they may seem. Chinese tech stocks, which had already been falling, have not been spared, and shares such as Pinduoduo, an online marketplace for agricultural goods; e-commerce company Alibaba and shopping platform Meituan have seen most of their equity value disappear. But it was the recent sell-off in the mega-cap US tech stocks that has really rattled investors with companies such as Amazon, Netflix, Microsoft, Apple and Tesla coming under significant pressure. This is typical of structural peaks in markets and sectors where the large caps or “generals” are the last to top, which often leads to a bear market. 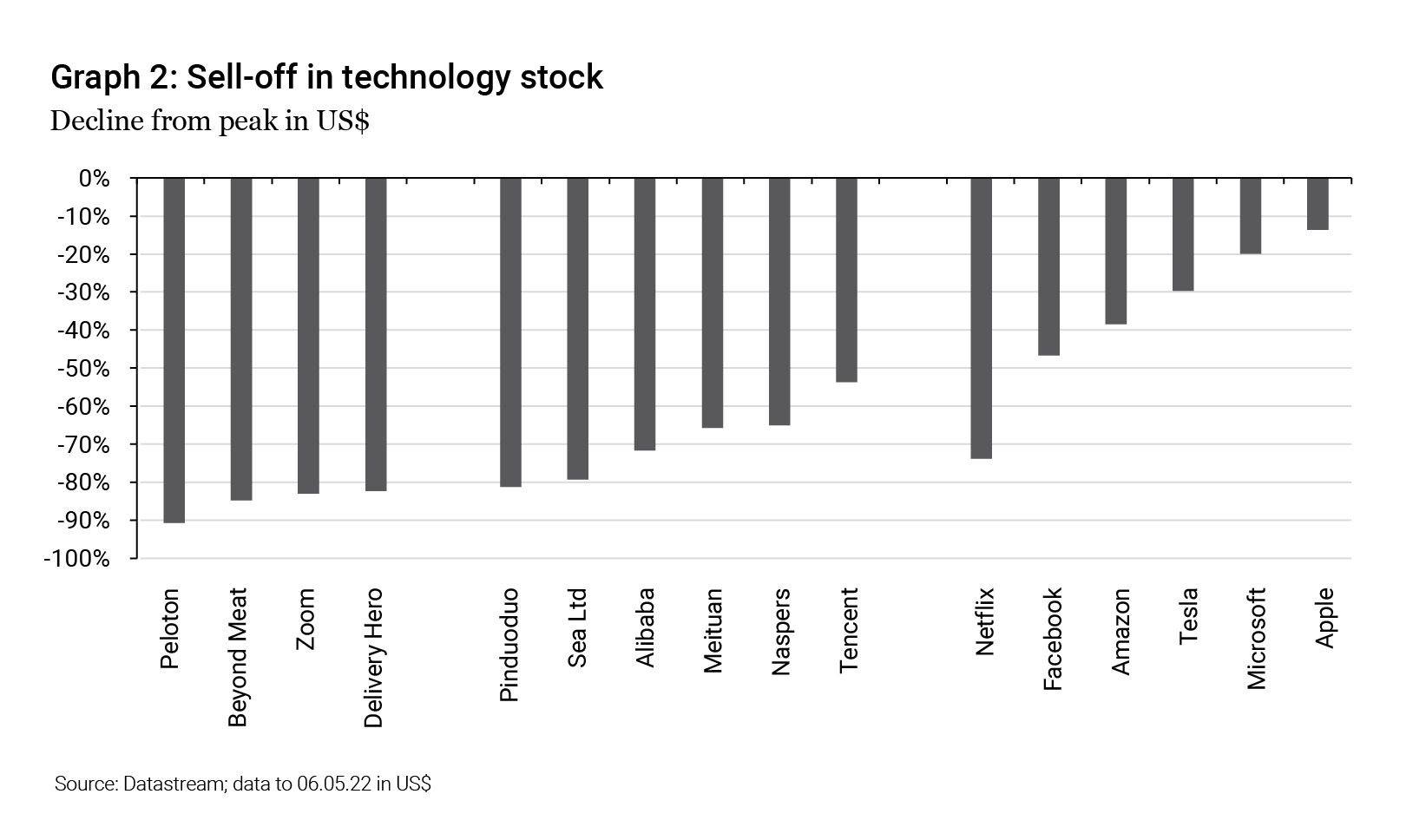 It is within this context that we can look at the decline in the share price of Naspers. The market is clearly very pessimistic about Naspers and its largest investment, Chinese tech company, Tencent. A lot has to do with uncertainty around what Chinese regulators, and indeed the Chinese Communist Party, may do next. In our view, despite the regulation and increased competition, Tencent remains very well positioned in its various markets. It is clearly a valuable asset to Chinese investors. What remains to be seen is if the same can be said for foreign investors. Naspers has continued to invest in several fast-growing sectors, including internet food delivery, which still has to show proven paths to profitability. Offsetting these negatives is the significant discount that Naspers trades at relative to its underlying assets. Tim Acker explained the complexities in a recent piece in our Quarterly Commentary.

Overall, we believe there are currently more opportunities locally, given the high prices of many offshore shares. This is guiding our thinking when we consider the broader opportunity set in light of our regulators allowing an increased allocation to offshore investment. Any changes to offshore allocation will depend on relative prices. We will move money offshore when the valuations justify the decision.

The key message:  In financial markets, momentum can be your friend for long periods of time until it stops and the ruling regime shifts. We believe the best way to navigate such changes is to be aware of history and extremes in markets but, most importantly, the price you pay for assets. The price you pay today determines your future returns.

Duncan was appointed chief investment officer in 2020. He joined Allan Gray in 2001 and was appointed as a portfolio manager in 2005. He manages a portion of the equity, balanced and stable portfolios. He is also a director of Allan Gray Group Proprietary Limited. Duncan holds an Honours degree in Business Science and a Postgraduate Diploma in Accounting from the University of Cape Town and is a CFA® and CMT® charterholder.

Jacques joined Allan Gray as an equity analyst in 2008 after working as a management consultant. He began managing a portion of the equity and balanced portfolios earmarked for associate portfolio managers in 2013 and was appointed as a portfolio manager in 2015. Jacques holds a Bachelor of Science degree in Mathematics from the University of Cape Town and is a CFA® charterholder.

Preparing for more uncertainty and volatility

A look back over the last two years reveals how difficult forecasting is. Even with perfect foresight of the pandemic context, one would not have been able t...

WATCH : It’s the price you pay that matters

As investors we shouldn&rsquo;t pretend we operate in a vacuum that is nicely insulated from the prevailing macroeconomic and political trends. However, it is...

WATCH : Active management: Potential for a comeback in a divided inflationary world

For most of the 2000s, the developed world has been characterised by disinflation and falling interest rates. This is despite a large increase in leverage, t...

Our take on the “shrinking” JSE

Several high-profile delistings over the recent past have spurred market commentators to discuss the JSE’s “slow death” in the context of a struggling local...